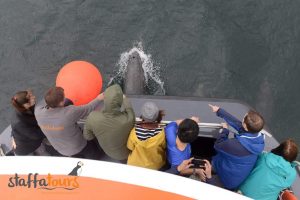 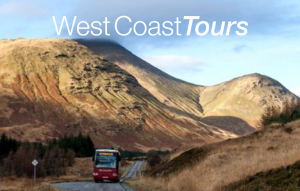 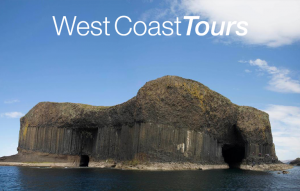 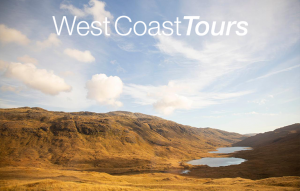 ABOUT ISLE OF STAFFA

It was Mendelssohn who perhaps came closest to capturing the magic of Staffa in the Hebrides Overture.

Modern visitors often start excursions to the island from Fionnphort on the Isle of Mull, though boats also leave regularly from the Iona pier. The voyage along the coastline of south west Mull is spectacular, with views of the precipitous cliffs of Ardmeanach and the Wilderness of Burg.

If you are fortunate with weather conditions you will be able to land and explore the natural wonders of Fingal’s Cave where the columns are intricately curved and distorted. Since all the caves face south east (with the exception of Clamshell which faces due east) they are best seen by morning light.

During spring and early summer, the cliffs and grassy slopes provide nesting sites for various seabirds including guillemots, razorbills and puffins.

Staffa attracted the attention of many of the great figures of the late eighteenth and early nineteenth centuries. The island became an accepted venue on the cultural grand Tour of Europe. Its marvels had first been made known after the visit of the naturalist Sir Joseph Banks in 1772, when he was en route to Iceland. Banks wrote:

“Compared to this what are the cathedrals and palaces built by men! Mere models or playthings, imitations as his works will always be when compared to those of nature.”

Shortly afterwards Johnson and Boswell made their celebrated excursion to the highlands and islands, but could only view Staffa from the sea as it was too rough to land. When Mendelssohn returned to the mainland after his visit he immediately made for the piano to try out the theme that had been inspired by the cave. He had hardly laid a finger on the keys when he was brusquely interrupted by his Scottish host who reminded him that it was Sunday and therefore music was out of the question.

Excursions to the island became more and more popular, and a piper was employed to play in the depths of Fingal’s Cave to give additional ‘atmosphere’. Scott, Keats and Wordsworth all wrote about their visits in verse, the latter lamenting that he had to share the experience with ‘a motley crowd… hurried and hurrying, volatile and loud’. In 1853 Tennyson echoed these sentiments when he found Staffa ‘as interesting as it could be with people chattering and forty minutes to see it in’.

This problem hadly affected Queen Victoria in 1847, though her retinue was large enough. In her journal she wrote of her visit:

“As we rounded the point, the wonderful basaltic formation came in sight. The appearance it presents is most extraordinary; and when we turned the corner to go into the renowned Fingal’s Cave, the effect was splendid, like a great entrance into a vaulted hall: it looked almost awful as we entered, and the barge heaved up and down on the swell of the sea. The rocks, under water, were all colours – pink, blue and green – which had a most beautiful and varied effect. It was the first time the British standard with a Queen of Great Britain, and her husband and children, had ever entered Fingal’s Cave, and the men gave three cheers, which sounded very impressive there…”

Staffa is a small island out at sea, its wildlife population is dominated by seabirds. A large colony of puffins breed on Staffa every summer and are always a firm favourite with visitors who can see them congregate on the cliffs, diving into the water then return with a beakful of fish. The best time to see the puffins is during the breeding season between the start of May and start of August when the birds have their distinctive colourful beaks.

Other seabirds that either nest or feed from the island include gannets, guillemots, razorbills, great northern divers, fulmars and great skuas.

In addition to Staffa’s rich seabird life, there is of course plenty of wildlife beneath the waves. On a trip to Staffa there are very often sightings of spectacular cetaecans such as dolphins, porpoises and, in the summer months, minke and fin whales. The warmer months also see the return of the mysterious and elusive basking shark whose massive fins are seen breaking the surface as it feeds.

The last grazing animals on Staffa were removed in 1997 resulting in a revitalising the island’s vegetation. While there are no trees, heather or shrubs, the variety of different types of soil provide fertile ground for such plants as buttercup, wild thyme, bird’s-foot trefoil and lichens that cling to the cliffs close to the major caves.

The fantastic precision of Nature’s work in building up the basaltic columns on Staffa is due to the steady cooling of flows of lava as they came into contact with a colder bedrock and were exposed to the even more chilling effects of the weather of northern Scotland on the outer surfaces. By some fluke of contraction on cooling the result is perfect, mainly hexagonal, columns. Curves in the columns were caused by the shape of the underlying rock over which the lava flowed.

Sometimes close inspection of the columns reveal whitish deposits between the joints, almost as though they were cemented. In fact, this is caused by salts such as calcite which were squeezed out of the basalt by immense forces of contraction as the rock cooled.

In the rather severe words of The Nature Conservancy it is a “spectacular example of columnar jointing in Tertiary plateau lava flow”. In 1973 it was declared a Site of Special Scientific Interest.

About 60 million years ago intense volcanic activity in the area led to a blanket of lava being fed far out into the Atlantic. Most has been eroded and dispersed, but Staffa, the Treshnish Isles, and other small islands have remained as stubborn outcrops. This is, of course, a simplification of a complex, still unfolding geological story.

Staffa consists of three layers of rock of different types, covered with a surface of rich soil and lush grass. The lowest layer is tuff, compressed volcanic ash and dust, the middle layer is composed of the basaltic columns, and the uppermost is made up of jumbled and fractured columns and volcanic debris. The whole structure is best appreciated from the sea a little way off the south of the island. A slant of some four degrees downwards from west to east, caused by disturbance deep down after the columns had been created, is apparent. The lifting of the tuff above sea level on the western portion provided the opportunity for the sea to exploit areas of weakness and create the three main caves there.

The columns were formed within a single, massive flow of lava as it cooled and solidified in a very gradual, controlled manner. As the material cooled its volume shrank slightly and the narrow spaces which separate the columns were created. Theoretically, every column should be perfectly hexagonal in section if the cooling process had occurred uniformly but there would have been a multitude of minor variations in the rock itself and in its pattern of cooling, leading to the considerable variety in column size and form that we can readily detect.

Staffa’s exceptional geological features are recognised as being of outstanding importance, and the whole island’s ecosystem which embraces its rock, soil, climate, topography, and the influences of its marine location, is precious.

Three features combine to make Fingal’s Cave on Staffa perhaps the best known of all caves.

Its struture is unique. Nowhere else is there a sea cave formed completely in hexagonally jointed basalt. Its appeal lies in the size, the sounds, the colours, and the remarkable symmetry of this 227 foot cavern, and by Nature’s gift of fractured columns which form a crude walkway just above high water level, allowing exploring visitors to go far inside.

Secondly, the evergreen popularity of Mendelssohn’s “Hebrides Overture (Fingal’s Cave)” provides a continuous stirring reminder of this wonder of the world.

And thirdly, the impact of the cave on all those who enter it, and especially on those who do so alone, is likely to be remembered for life. Sir Walter Scott put it into words for us:

“..one of the most extraordinary places I ever beheld. It exceeded, in my mind, every description I had heard of it …composed entirely of basaltic pillars as high as the roof of a cathedral, and running deep into the rock, eternally swept by a deep and swelling sea, and paved, as it were, with ruddy marble, baffles all description.”

How Fingal’s Cave was Formed

The question “how was Fingal’s Cave formed?” is often posed. Eminent visitors have seriously asserted that it must, because of its regularity and because it points exactly at Iona, have been hollowed out of the island by hand. In fact, the answer is straightforward. Since the layer of rock made up of columns would all have been laid down at one time it follows that when the tilting occurred there would have been pressure above the present site of the cave, and a fissure would have been forced open directly below, where sea now surges in. The violent action of huge waves that would have struck the island during storms over thousands of years developed the fissure, undermining dozens of columns, to create the opening we marvel at today.

Origin of the Name

The origin of the name ‘Fingal’s Cave’ is wrapped in myth. Around 250 AD Finn MacCumhaill, or Fingal, was possibly an Irish general who had a band of faithful warriors – a Celtic parallel to King Arthur and his Round Table. Fingal is supposed to have been the father of Ossian, traditional bard of the Gaels.

Gaels migrated into Scotland from Ireland until the Norsemen began their raids on the Scottish coast, and the stories of Fingal would doubtless have come across too. Soon he became revered in Scotland and, boosted by the Ossianic heroic verse and songs, his name was a natural choice to assign to this dramatic and awe inspiring cavern.

In 1829, on 7th August, Felix Mendelssohn visited Fingal’s Cave. With his friend Klingemann, Mendelssohn set out on the newly introduced paddle steamer service to sail round Mull calling at Iona and Staffa, returning down the Sound of Mull to Oban. The day was wild and all the passengers were ill. Klingemann tells of the arrival at Staffa:

We were put out into boats and lifted by the hissing sea up the the pillar stumps to the celebrated Fingal’s Cave. A greener roar of waves surely never rushed into a stranger cavern – its many pillars making it look like the inside of an immense organ, black and resounding, and absolutely without purpose, and quite alone, the wide grey sea within and without.

Conditions were so bad that the little craft had only reached Tobermory by nightfall, and Mendelssohn can hardly have enjoyed seeing Fingal’s Cave since he was so seasick. However, the visit to Staffa, and the sight and sound of the Atlantic swell tumbling into the Cave, made a profound impression on him. The theme in the illustration, which he later developed into the ever-popular Hebrides Overture, occurred to him immediately. He was just 20 years old.